I used to hate washing dishes. I can't say that I love it. My dishwasher has recently stopped working properly and it’s been more of a blessing than a curse because it’s allowed me to contemplate in silence, after the kids have gone to school. I’ve enjoyed the past few months off work to recover from surgery. I’ve learned some deep life lessons during this time which has felt like an Awakening.

These lessons actually began to be “birthed” while grieving my sister’s recent death. Lessons like: Let it be, (regarding family relationships that can’t be fixed and not being able to say goodbye to her) Really LIVING life, Being Present, Just BE (not constantly “doing”) and that I’m already worthy without having to do or be anything in particular, that imperfection doesn’t make me unworthy of love.

As I wash each dish I have to focus on what I’m doing temporarily and of course my mind does what minds do best - come up with thoughts. In the past I have tended to get carried away with multiple off-shoots of thoughts or think negatively if I’m feeling tired or down, especially if all I can think of is that I don’t want to be doing the dishes and would rather be doing something else.

I had never heard about Mindfulness until my therapist told me about it and it’s slowly changing my life, as I retrain my mind to be present instead of in another world. I used to be constantly distracted by someone else’s story, either in real life, movies, music, TV or novels, as coping mechanisms. The best definition I've found for Mindfulness is by Jon Kabat-Zinn: Paying attention in a particular way, on purpose, in the present moment, non-judgmentally.

Rather than being zoned out most of the time, I want to be present. Not stuck in the past, the future or another world. It’s not an overnight thing, but rather a change of focus. I am determined to learn how to stop the cycle of not being able to connect with immediate family members because everyone is in their own world. This is why I'm so passionate about awareness and I’ve been reading everything I can on the subject.

Mindfulness is kind of like meditation, the meaning of meditation that I go by is emptying the mind while remaining still and focused on breathing. A thought will come and then we return our attention back to our breath. What makes mindfulness different than meditation is that you're not still, in this case, I return my attention back to washing the dishes. It’s easier than brushing my teeth, I’ve not been successful about being mindful about that yet, but I’ll keep trying. Even in the shower, I have this order I follow so I don’t forget to wash my hair (yes it’s happened) because it’s so easy to let the mind wander while in the shower, like my mind has just wandered as I write.

As I started washing dishes today, I’ve been thinking about Acceptance as another deep life lesson during my awakening. Awakening is how I describe how I’ve finally become aware of my thoughts and that I am the observer of them. I feel like I’m conscious for the first time. I can entertain a thought and then choose to accept or reject it. To some that may be common sense, but to me it is a fairly new and fascinating concept.

I get misunderstood a lot and I think this may be another thing that others won’t understand but I just want to say that I’m learning and I have by no means arrived. It’s not a religion in any way and I’m not following anything or anyone in particular, it’s just a shift in my consciousness in which thinking and awareness become separate. It was a long process of many years rejecting my cult upbringing and leaving the religious doctrine behind.

I was shunned when I left because being a free-thinker is seen as a bad influence and also because I took a stand against abuse, resulting in me being seen as a threat. I’ve always lived my life around kindness and the golden rule. My soul didn’t belong in a cult. It was excruciating to go through the loss of most of the family I grew up in and everyone in my church (which was my only circle of friends being homeschooled) but now I see it as the best thing that ever happened to me because it left me with nothing to lose as I ventured forth to freedom. It gives me compassion for most people I know who still are bound to what the people in their circle would think if they dared to become who their soul is calling them to be.

Here I was trying to find myself, having skipped that stage by getting married and when I turned 18 and having kids right away. Becoming independent as a wife and mother was a challenging situation. I was raised to be a only a servant and to put my needs last. Practicing self-care and figuring out what I wanted in life had me feeling conflicted as I tried to live an autonomous life. My mind was blown when I came across the following quote from Feverborn that explains how I wasn’t able to communicate my needs before because, I didn’t know who I was or what I wanted:

“Boundaries were necessary for a successful relationship. Most relationships aborted in the boundary-defining stage. Not because people demanded what they needed, but because they didn’t, then got resentful about it”

Acceptance is not only “Letting it be” It is also about accepting thoughts instead of fighting them. After being honest with myself I decided to be honest with those closest to me about what I needed. It was a very scary thing to do because I was afraid of rejection. I was pleasantly surprised with the understanding I was met with. It gave me complete freedom and made me re-evaluate what it was I was longing for in the first place, which turned out to be Acceptance and Unconditional love.

Once I had this acceptance, it was painfully clear that I needed acceptance from myself. Instead of fighting thoughts off because I was trained they were bad and it made me a bad person to think them, I started accepting and even welcoming the thoughts as I became aware of them. I began to label the thoughts without judgement, realizing that I am only the observer of the thought. Visualizing myself as a young child and comforting her, not as a parent or boyfriend figure, but actually ME (the observer) loving my own soul. Treating the mind almost like a separate person, that needs a ton of guidance to mature.

Words cannot express how wonderful it feels to realize that I am not my past. When people want to get to know me, that I don’t have to tell my entire life story in order for them to understand me. Every day is a new chance to re-invent myself. I’m much more interested in what a new person in my life can teach me rather than listening to myself talk and having acceptance be the only thing I care about.

Free does not accurately describe what it’s like to not be stuck in the past and not present an angry persona when I’m with others when a subject comes up from my past that brings out my fight or flight reaction. My mind allows me to “Let it be” If others don’t accept or understand me, I just accept that they don’t accept. It's helping with my social anxiety.

Practicing self-care for my inner child is much like babysitting. Making sure the child gets to bed on time, spends time outdoors and has healthy food and drink options accessible. It also means setting up a routine so there is free time in addition to school, chores or work.

The best gift you can give another person is the gift of attention, so that means paying attention to your inner child when she reacts to a situation, figuring out why she had the response and how to deal with it. A therapist can be helpful with this also. If you can't afford a therapist, the book Complex PTSD by Pete Walker is the next best thing.

My therapist made me aware of how much I got caught in the thought trap of what I “should have” done or said. Viewing my thoughts as separate from who I am as a person, took away the shame I used to feel. I don’t have to believe or act on everything I think. I also don’t have to decide “who I am” and be a certain way. I can shred the script and live an entirely different way whenever I choose to do so.

We need to respond to our thoughts with compassion and acceptance to help our inner child heal, and always remember to be gentle with ourselves. Acceptance from myself is the key. 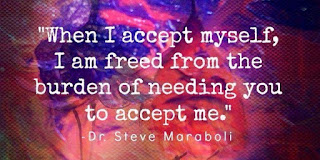 Posted by Mindful Regeneration at 15:23 No comments: